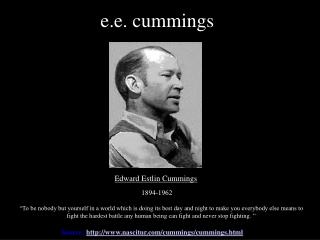 e.e. cummings. Edward Estlin Cummings. 1894-1962. “To be nobody but yourself in a world which is doing its best day and night to make you everybody else means to fight the hardest battle any human being can fight and never stop fighting. “. Famous Travel Quotes by E.E. Cummings at QuotesOnTravel.com - May came home with a smooth round stone as small as a world

“Somewhere I have never travelled gladly” by E.E. Cummings - . per.1 stephanie castaneda . what the title meant in my

Chapter Nine Appreciation of E.E. Cummings Poetry from the Perspective of Foregrounding - . 1. introduction to cummings