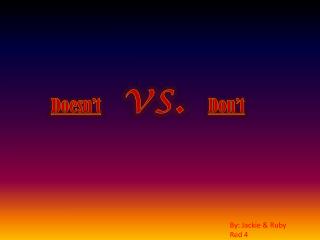 vs. Doesn’t. Don’t. By: Jackie & Ruby Red 4. Doesn’t is an auxiliary verb. Auxiliary verbs being another description for helping verbs. The verb doesn’t is used to make sentences negative. VS. - Showing. vs. . telling. “ show the readers everything, tell them nothing.”  -ernest hemingway. “don't tell