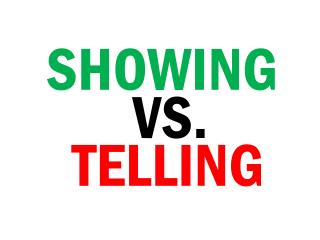 SHOWING. VS. . TELLING. “ Show the readers everything, tell them nothing.”  -Ernest Hemingway. “Don't tell me the moon is shining; show me the glint of light on broken glass.”  ―  Anton Chekhov. First Base.