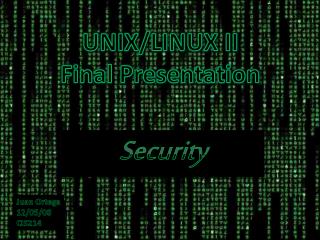 UNIX/LINUX II Final Presentation. Security. Juan Ortega 12/05/08 CIS214. Being a multi-user system - UNIX and Linux have a tremendous amount of security to offer; many being open source, which can be validated and modified to meet anyone’s needs. The OWASP Testing Framework - . (based on the “new owasp testing guide” presentation by matteo meucci and alberto

LINUX - . linux is a generic term referring to the family of unix-like computer operating systems that use the linux

UNIX - . jehan-françois pâris jfparis@uh.edu. why unix?. first os that was portable was written in a “ high-level

unix - . unix is a layered operating system. the innermost layer is the hardware that provides the services for the os.

CST8177 Linux Operation Systems II aka Linux II - . course objectives to add to your knowledge of linux tools to learn