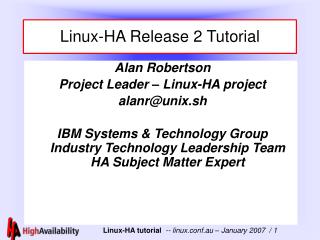 Linux-HA &amp; Heartbeat - . heartbeat. is a daemon that provides cluster infrastructure. it must be combined with a

The application of DRBD in Linux-HA - . haibo zhang 4/28/2014. what is drbd?. drbd (distributed replicated block device)