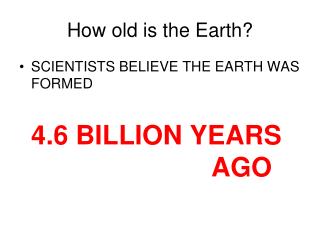 How old is the Earth?. SCIENTISTS BELIEVE THE EARTH WAS FORMED 4.6 BILLION YEARS AGO. 4.6 – 3.8 Billion Years Ago The formation of our solar system. 3.8 – 2.5 Billion Years Ago. Earth’s crust was cooling and rocks and continental plates were forming. OC/GEO103 Lecture 5 Earth Structure - . what’s inside the earth? is there really another world at the center? what

Phases of the Moon - . edward m. murphy space science for teachers. earth moon system. the average distance from the moon