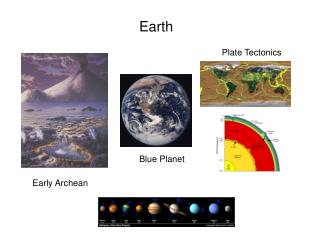 The Four Natural Elements of Life Earth , Air , Fire , Water - . by: amanda burleson. understanding the importance of the

Earth and Its Neighbours - Unit 5. earth and its neighbours. a student is asking his teacher about the sky at night.

Age of the Earth and Age of the Universe from Religious Points of View - &quot;the creation of the heavens and of the

What makes Earth unique - . where is the water on our planet ?. water storage reservoirs. water (hydrologic) cycle. water

The Earth as Humanity’s Home - . chapter 3 part 1- the organization of humanity . spaceship earth . the term spaceship

EARTH - . by: michelle anderson, jaamal davis, dasheckalee rose, and tamra bell…. why is earth called earth???. in the

Earth Systems Overview - . the earth is a system consisting of four major interacting components: the atmosphere, the