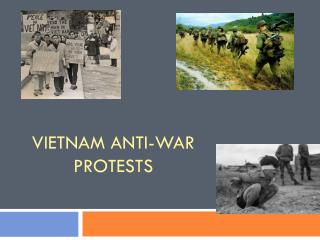 Vietnam anti-war protests. AGENDA FOR TODAY . QUICK WRITE: Tell me everything you know about anti-war protests; specifically what happened during the Vietnam war on the home front? Lecture on home front protests Protest poster project Discussion of Posters. How did protests against the Vietnam War develop? - . lesson objectives. to identify the different ways that people

College Protests During Vietnam - . campus impact. much of the anti-vietnam movement began on college campuses around the

Vietnam War - . look at the following images of the war and draw some preliminary conclusions about the war.

Vietnam War - . brainstorm. what is an alliance of convenience? who did the us back in the vietnam war? who were some of

Vietnam War - . a background to the war. brief history of vietnam. france assumed control over the whole of vietnam after

Vietnam War - . essential questions. was it possible for the united states to have definitively won the vietnam war?