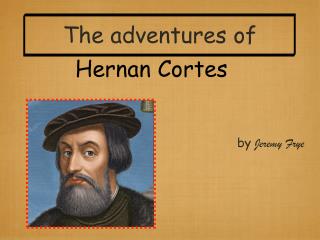 The adventures of . Hernan Cortes. by Jeremy Frye. Route of exploration. Cortes was a noblemen.

Aztec and Cortes - . ss6h1 the student will describe the impact of european contact on latin america a. describe the

When was Hernan Cortes born? Was he a Polish traveller? - Where did he leave spain and go to hispanola? which country

Hernan Cortes - . by: olivia. hernan cortes was a spanish nobleman and lived in cuba. he decided to sail to mexico in

Hernan Cortes - . yoli bosiljevac. birth 1485. cortés was born in medellín , in the province of extremadura , in the

Hernan Cortes - . by johnny, matt, and josh. were was the explore born?. medellin, spain. was he a nobleman, sailor,