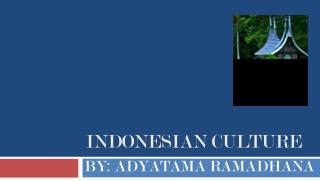 Indonesian Culture. BY: ADYATAMA RAMADHANA. WHAT IS THE INDONESIAN CULTURE?. Indonesian Loggers - . rachael parks. the situation. a flash flood on the island of sumatra (the size of great britain)

Indonesian assignment - . by nick attrill 7c. geography. 1 .indonesia is located in between the indian ocean and pacific