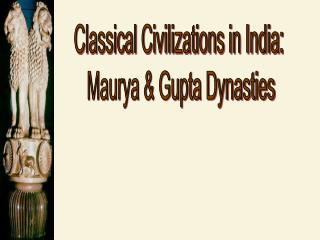 Classical Civilizations in India: Maurya & Gupta Dynasties. Classical India. By 600 BCE, India had passed through its formative phase. A classical civilization could now build on the social and cultural themes introduced during the Vedic and Epic ages.

Classical Civilization - . india!. topography of india. subcontinent of india is partially separated from the rest of the

The Golden Age of the Guptas - . essential question who were the guptas, and when did they rule india? the gupta empire