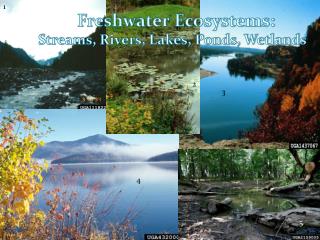 RIVERS STREAMS - Where is the water ?. the worlds largest rivers. the hydrologic cycle. infiltration = groundwater

LAKES AND PONDS ECOSYSTEM - . ponds and lakes. range in size from just a few square meters to thousands of square

Lakes and Ponds - . by: meredith maynard and krystin vickers. geography and climate. location – all continents and all

Lakes and Ponds - . chapter 12. conditions in lakes and ponds. cons: oxygen is limited the deeper you go, the darker it

Lakes, rivers and ponds - . owen and marle y. our habitat is the pond. a pond is a small area of still fresh water. ponds

Rivers and Streams - . chapter 6.1 and 6.2. the distribution of earth’s water. the water cycle. water cycle processes.

Freshwater Wetlands - . by mandy marcinko and katie cato per 4. map of the biome. location. freshwater wetlands are found