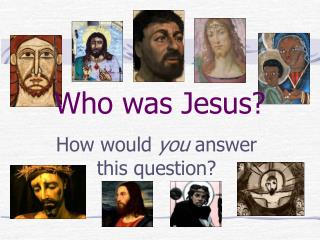 Who was Jesus?. How would you answer this question?. Historical Jesus Born 4-7 BCE in Nazareth A carpenter’s son Born, raised, lived and died a Jew A wise, story telling teacher A miracle worker and healer A radical revolutionary Crucified at the hands of the Romans. Jesus, the Christ NOTHING BUT THE BLOOD OF JESUS What can wash away my sin? What can make me whole again? - . for my pardon, this i see for

Luke’s Story of Jesus as Counter-Narrative - . reading luke in communion. luke story of jesus was written not to

‘Jesus died for our sins’ what do we mean? - . a comprehensive look at the death of jesus and what it means for us.