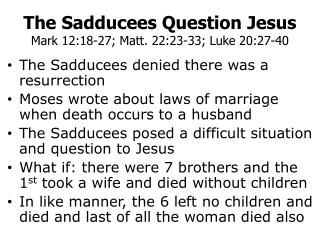 The Sadducees Question Jesus Mark 12:18-27; Matt. 22:23-33; Luke 20:27-40. The Sadducees denied there was a resurrection Moses wrote about laws of marriage when death occurs to a husband The Sadducees posed a difficult situation and question to Jesus

The Destruction of Jerusalem Matt. 24; Mark 13; Luke 17, 21 - . the destruction of jerusalem. introduction. a. important

What Does the Resurrection Mean? - . review. in previous lessons looked at evidence of christ's life, death and

That’s Not What A Kiss Is For Matthew 26:47-56 - . the conspirators the confrontation the cowards. the betrayals

Luke 24:15 - . as they talked and discussed these things with each other, jesus himself came up and walked along with

John 17:1-5 After Jesus said this, he looked toward heaven and prayed: