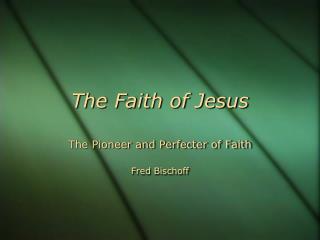 The Faith of Jesus. The Pioneer and Perfecter of Faith Fred Bischoff. Review of Study #4. The "faith of Jesus" is vital for Adventists, those living in the final day of Atonement just before Christ's second coming. The Faith of Jesus - . the pioneer and perfecter of faith fred bischoff. guidelines for bible study. 1. holy spirit: ask

The quest for the Historical Jesus and the Jesus of faith - . november 2, 2010. learning objectives. recognize and

Having Faith in the Lord Jesus Christ - . primary 3 (ctr-b): lesson 29. purpose. to strengthen the children’s faith in

1. Who is Jesus? The Trinitarian Faith - . christianity means a belief in trinity and oneness ( monotheism) oneness : -

Faith: Living and Learning in the Faithful One The Foundation of The Faith: Jesus Christ, - Colossians 1:15-23. he is __

Jesus Christ: Focal Point of Our Christian Faith - . explain the future and present reality of the kingdom of god using

The Discipline Of Faith - . “choosing your yoke”. jeremiah

THE SHIELD OF FAITH - . (eph. 6:16) “above all, taking in shield of faith with which you will b eable to quench the

Foundations of The Faith - . the return of jesus. 1 thessalonians 1 corinthians revelation. eschatology: the return of