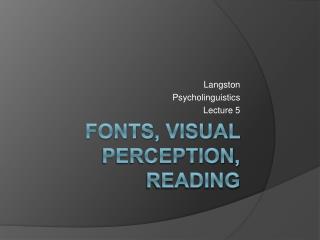 Langston Psycholinguistics Lecture 5. Fonts , visual perception, reading. Plan. Top-down Comprehension Bottom-up. Plan. Our goal is to start with the input and see how far we can take it. Constraint satisfaction problem.

Before Reading_Main - . before reading. global reading. detailed reading. after reading. 1. a survey. 2. listening

Perception of illumination and shadows - . lavanya sharan february 14th, 2011. studied indirectly. not a lot of studies

Fonts can be your BFF! - . a lesson in font management by yours truly. in the beginning there was papyrus and a quill