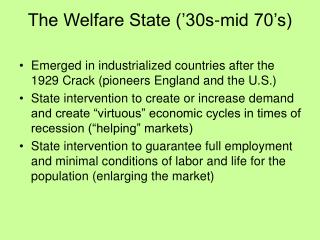 The Welfare State (’30s-mid 70’s). Emerged in industrialized countries after the 1929 Crack (pioneers England and the U.S.) State intervention to create or increase demand and create “virtuous” economic cycles in times of recession (“helping” markets)

Founding Principles of the Welfare State - . to what extent have they been met?. want disease ignorance squalor idleness.

Agricultural Animal Welfare - Does agriculture improve the welfare of animals…? …or cause unnecessary suffering?