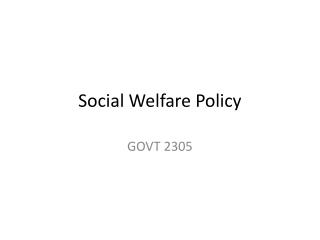 Social Welfare Policy. GOVT 2305. What is Social Welfare Policy?. One Definition: the principles, activities, or framework for action adopted by a government to ensure a socially defined level of individual, family and community well being. – Source .

Delivering Social Welfare - . social agendas and the future. discussion. in just off the plane from wales, someone

WELFARE POLICY - . means test. while an entitlement program such as social security is available to all who meet certain

Chapter 5 Consumer Welfare and Policy Analysis - . the welfare of the people is the ultimate law. cicero. chapter 5

Social Welfare and Policy Analysis - . measuring the gains from trade. whenever an exchange (or trade) takes place

Social Work, Social Justice, and Social Welfare Policy: A Human Rights Agenda - The history of social welfare in the

Social Welfare in Britain - . from welfare to workfare: recasting social security. three prior announcements…. no