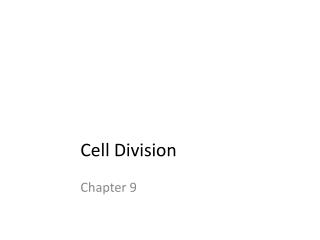 Cell Division. Chapter 9. Why do you think cells in all plants and organisms need to divide? To replace damaged tissue To increase in size To reproduce. Repair. Cells are constantly repairing themselves If a cell can’t be repaired new ones are produced to fill the void. Growth. Chapter 8 Cell Reproduction - . http://www.pisgahscience.com/bioonline/. which of these pictures shows an organism with

Cell Membranes &amp; Movement Across Them - . cell (plasma) membrane. cells need an inside &amp; an outside…

Chapter 19: Using Genetics to Study Development - . development. an organism arises from a fertilized egg as the result

The Cell - . empty slide to keep flashcards in order. what is a prokaryote?. prokaryote ?. prokaryotes do not have :

Chapter 7 Cell Structure: A Tour of the Cell - . cell: a basic unit of living matter separated from its environment by a