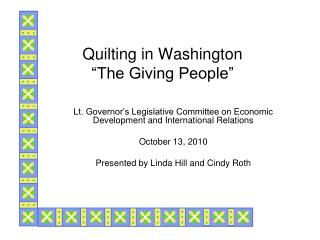 Quilting in Washington “The Giving People”

Quilting in Washington “The Giving People”. Lt. Governor’s Legislative Committee on Economic Development and International Relations October 13, 2010 Presented by Linda Hill and Cindy Roth. History of Quilting. Started as necessity to keep warm, possibly from the Chinese or Egyptians

Quilting in Washington “The Giving People”

Welcome to... - Welcome to. and i surrender, all to you, all to you. i’m giving you my heart, and all that is within. i

Giving voice to the voiceless - . how did we begin?. conceptualized and founded in 1997, uks – a research, resource