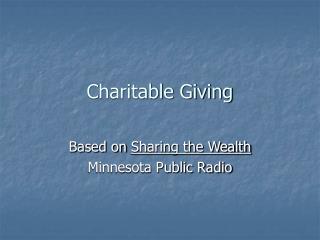 Charitable Giving. Based on Sharing the Wealth Minnesota Public Radio. Facts and Figures. People who attend religious services gave 2.3% of their income, compared with 1.3% for those who do not. 70.1% of American households contribute to charity each year

Charitable Giving - . what is it?. how can i get involved?. « giving is the best communication ». click here for

City of Dallas Charitable Giving Campaign - . charity speakers and fairs training. philanthropy is based on voluntary

Benefits of Donations and Charitable Giving - We believe that everyone deserves an equal opportunity in life. through our

Using Field Experiments to Understand Charitable Giving - . john a. list university of chicago some facts about the

Estate Planning with Charitable Giving: Leaving a Legacy - . september 20, 2011. what we will cover. values-based

2007 CT State Employees’ Campaign for Charitable Giving - . who is the csec?. the connecticut state employees’