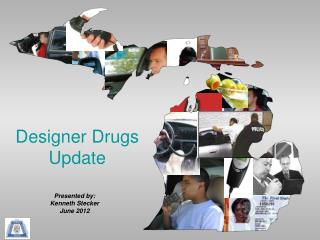 Designer Drugs Update. Presented by: Kenneth Stecker June 2012. Designer Drugs. Bath Salts Spice/K2. What are “Designer Drugs?”. “Designer drugs” are chemicals that have been made specifically or “designed’ by underground chemists so that they: Designer Drugs: - . drugs, which are created (or reformulated, if the drug already existed) to get around existing drug

Rave Drugs: Designer Drugs With a Price - . travis r. welch, nremt, pa-s. the “rave” scene began as a subculture in

Designer and look-alike drugs - . what are designer drugs?. ecstasy (drug), popular term for an illegal,

Designer Drugs – What You Need to Know The Fundamentals - . by: paul l. cary toxicology laboratory university of

Update on Alcohol, Other Drugs, and Health - . january–february 2012. studies on interventions &amp; assessments.