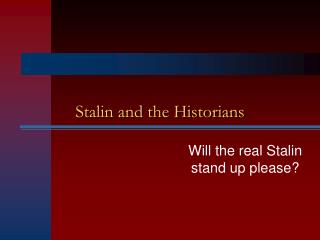 Stalin and the Historians. Will the real Stalin stand up please?. Notes borrowed from . Peter Oxley Stalinist Russia by Michael Lynch Stalin by Stephen J Lee. Problems of evidence: How do we know?. Evidence itself is neutral It’s the historians who give it meaning Pre-historic Times - . what do you know about prehistoric man?. what i know…. how are geography and history linked? how

Stalin and the USSR - . history 12 ms leslie. who to lead the ussr?. moderates - wanted to continue nep and slowly build

JEOPARDY Russia #4 - . by the numbers - 100. the number of five year plans it took for stalin to achieve

The Cold War 1945-1990 US vs. Union of Soviet Socialist Republics Democracy vs. Communism Capitalism vs. Socialism

From Lenin to Stalin - . kevin j. benoy. bolshevik victory?. bolshevik russia emerged from the long years of ww1 and the