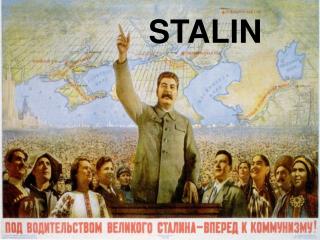 STALIN. Stalin was born on December 21, 1879 He was a peasant like many other Russians at the end of the 19 th Century. Stalin suffered from a severe case of smallpox, a disease that killed many people during this time. Stalin Survives. STALIN: - . mad, bad, and sad. josef stalin. not his real name, he’s not even a russian. born in georgia (caucusus) in

JOSEPH STALIN - . stalinism: an ideology based of stalin’s interpretation of communism, characterized by totalitarian

Joseph Stalin - . by: patrick mclaughlin. stalin's family . stalin's dad was a shoe maker his mother has a wash woman

FQ: How did Stalin gain power and use propaganda to control Russia ? - . do now (5 min): first read: key ideas and

Joseph Stalin - . 1879-1953. background info. joseph stalin was the second leader of the soviet union. his real name was