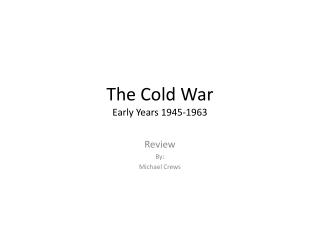 The Cold War Early Years 1945-1963. Review By: Michael Crews. Planning the Post-war World. Yalta Conference Established free elections in postwar Europe Established the United Nations Every country in the world could have a seat in the general assembly Origins of the Cold War, 1945-1963 - . democracy vs. communism. the division of germany and berlin among the allies was

The Early Cold War Years - . quick-write #3. review from the last two classes… give two pieces of evidence from the

The Cold War: The Early Years - . 1943-1953. the grand alliance. origins of the alliance the second front the big three

15.2 The Early Cold War Years - . i. containing communism. in an effort to deal with the soviets, diplomat george kennan

Early Years of the Cold War - . the future of the postwar

The Cold War 1945-1991 - . definitions. capitalism = an economy where the production and selling of goods/services are