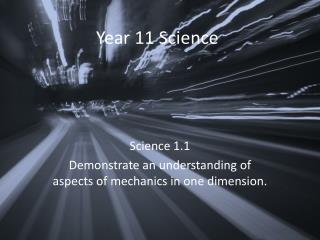 Year 11 Science. Science 1.1 Demonstrate an understanding of aspects of mechanics in one dimension. SLO’s. You will be able to give reasons why phenomena, concepts or principles relate to given situations in the context of;

GCSE Science Assessment - Triple or 3 separate Sciences - . what science qualifications could your child be studying?. 2

Science Quiz 4 th Grade Magnets/Electricity - . use the glossary from the magnetism and electricity workbook to answer

Year 7 Science - . ks3 curriculum . science at key stage 3 places an emphasis on the process of scientific enquiry as

AQA Triple Science Year 11 - Final exams and controlled assessments will lead to 3 gcses at the end of year 11 (biology,

What Science Should I Take Next Year ? EARTH SCIENCE Are you going to be a Freshman next year? - Do you like fun, hands

Edexcel GCSE Science - . gcse science is changing. new specifications have been introduced for first teaching from

Year 6 Science by Mrs. E. Spiff - . hello children!!. welcome to a term filled with fun and lots of scientific