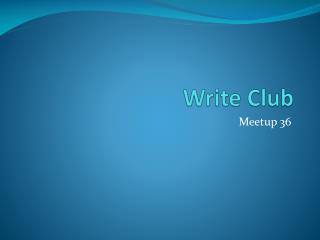 Write Club. Meetup 36. Exercise #1. Write fiction, nonfiction, or poetry to any of these titles Time Which Made a Monkey of Us All Dreamer in a Dead Language A Conversation With My Father A Man Told Me the Story of His Life. Unreliable Narrator. Business over Breakfast Clubs BoB clubs - . click to move to next slide. why do business owners join bob clubs?. to

Jane C. Schaffer or The High School Writing Process - . mission statement. the mission of this lesson is to provide

Welcome to Writing Club!!! - . scholars. welcome!!!. thank-you all for showing your interest in writing club! i am so

The Memphis Book Club Project - . the university of memphis dept. of instruction and curriculum leadership with funding

Write the following in your journal: - . c onnotations , or shades of meaning . example : you might describe the rigid

Journal Write - . ***have out: expository benchmark essay (mistakes = opportunity for learning) and your pink strategies