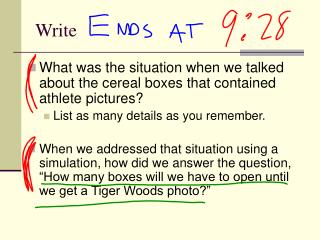 Write What was the situation when we talked about the cereal boxes that contained athlete pictures? List as many details as you remember. When we addressed that situation using a simulation, how did we answer the question, “How many boxes will we have to open until we get a Tiger Woods photo?”