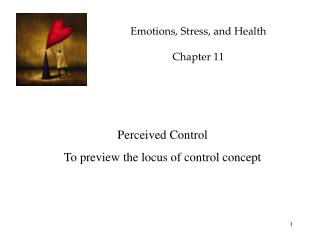 Stress, Health, and Wellness - . chapter 14. living with stress . most anything is capable of producing stress –

Stress, Health and Coping - . chapter 14. stress. stress is real and can have many side effects. stress , the physical

Mental Health: Ch 9- Managing Stress - . eq- what are ways to recognize stress? how do you deal with stress?. by

The Disgust Scale Introduces a discussion on disgust - Emotions, stress, and health chapter 11. the disgust scale

Health, Stress, and Coping - . chapter 15. health, stress, and coping. what is stress? the stress-illness mystery the