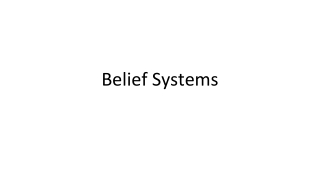 Belief Systems. Animism An ancient religion that centralizes it’s beliefs around the belief that human-like spirits are present in animals, plants, and all other natural objects. The spirits are believed to be the souls of dead ancestors. Spirits possess living and non-living things