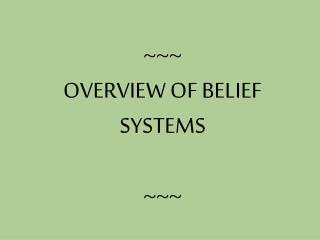 ~~~ OVERVIEW OF BELIEF SYSTEMS ~~~. POLYTHEISM. Polytheism. POLYTHEISM. Belief in, or worship of, multiple deities or gods. Gods are conceived as complex personages of greater or lesser status, with individual skills, needs, desires and stories.

Polytheism - . like the mesopotamians the egyptians worshipped many gods (polytheism). gods and goddesses. osiris- the

Belief systems A study in spiritual life and moral codes - Essential questions how do people make sense of their world?

CULTURE - . definition:. culture is a complex system of meaning &amp; behavior that defines the way of life for a

Answering Objections Yet Moving Them A Step Closer - . www.meeknessandtruth.org. types of sour notes you might hear.