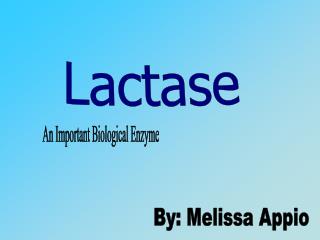 Lactase. An Important Biological Enzyme. By: Melissa Appio. Enzymes. An enzyme is a protein that catalyses a chemical reaction. Enzymes are able to speed up the reaction by lowering the activation energy needed for the reaction to occur. Lactose. The Case for Lactase? - . evaluate and report on the claims of an advertisement for dr. sam’s fantastic stomach

Evolution of Lactase Persistence in Humans - . take notes on your quiz while we discuss. humans become

Lactase- The enzyme that would cry over spilt milk - . what is lactase?. enzyme responsible for breaking down the