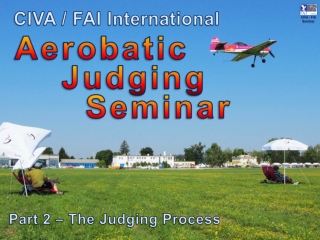 John Haag - Aerobatic Pilot - John haag was born in karachi, pakistan and spent much of his childhood moving with his

JUDGING - Common. concepts. ? shouldn't judge anyone."?i'm not going to judge anybody."?your not the

Judging - . most misused passages in the nt :. john 3:16 for god so loved the world that he gave his only begotten son,

Judging - . matt 7:1-5. introduction. this is one of the most misinterpreted, misapplied, and misused bible verses. when

JUDGING GUIDELINES - . this is for judges and coaches at the nw parli-ie warmup. welcome to our community’s tournament.

Judging Workshop - . key member presentation. 1. 2. 3. 4. what are we going to do?. introduction group energizer “what

Judging in Europe, Judging in Asia - . gp kuala lumpur 2014. intro. what this seminar is about encourage you to try to

Horse Judging - . conformation defined. the formation of something by appropriate arrangement of parts or elements : an

JUDGING DEBATE - . welcome to judge training. first things first thank you for giving up your time to help our students.

International Aerobatic Club Local Chapter - . why should we start one and how do we get started? a.j. hefel. what is

Poultry Judging - . classes of the contest. classes a &amp; b - live birds b – reasons classes c –