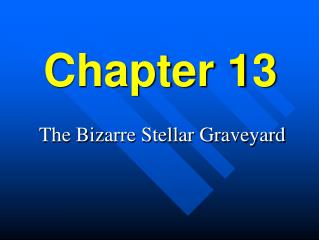 Chapter 13. The Bizarre Stellar Graveyard. White Dwarfs. ...are stellar remnants for low-mass stars. ...are found in the centers of planetary nebula . ...have diameters about the same as the Earth’s. ...have masses less than the Chandrasekhar mass . Sirius B is a white dwarf star.