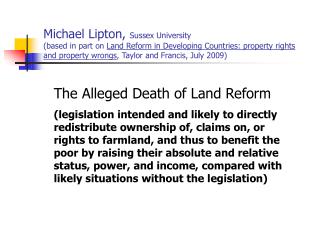 The Alleged Death of Land Reform The Alleged Death of Land Reform

COMMISSION ON RESTITUTION OF LAND RIGHTS - . restitution update: annual report to 31 march 2003 and progress to date.

“I Rigoberta” and the Politics of Discourse - . &quot;for common people such as myself, there is no difference

Thailand - . the only nation in se asia that was not colonized. economy. with a well-developed infrastructure, a

China under Mao Zedong 1949 - 1976 - . pages marked with a require written responses from you. place your written

CHY 4U0 – West and the World Unit 1- Renaissance and Reformation - . powerpoint has new layouts that give you more ways

The Distributive Property - . the distributive property is mental math strategy that can be used when multiplying. 43 x