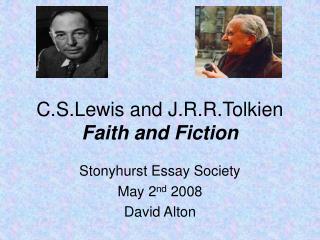 C.S.Lewis and J.R.R.Tolkien Faith and Fiction

C.S.Lewis and J.R.R.Tolkien Faith and Fiction. Stonyhurst Essay Society May 2 nd 2008 David Alton . The Last Battle. "Welcome, in the lion's name. Come further up and further in....the further up and the further in you go, the bigger everything gets. The inside is larger than the outside.".

C.S.Lewis and J.R.R.Tolkien Faith and Fiction