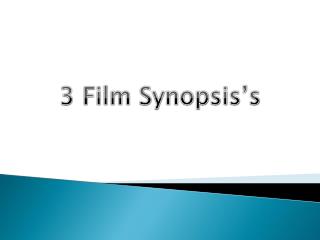 3 Film Synopsis’s. Idea 1: Email at your own risk. The first idea ties in with contact, about how due to technology you must be careful who you speak to nowhere days. The short film will show how young girls can get wrapped up in a cyber relationship, and how it can go wrong.

Dental X-ray Film Processing - . film processing. refers to a series of steps that produce a visible permanent image on a