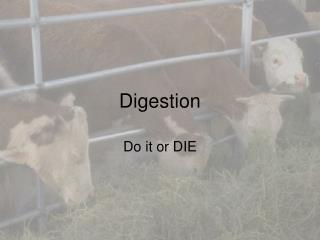 Digestion. Do it or DIE. Digestion. Digestion is the process of breaking down feed into simple substances that can be absorbed by the body. Absorption is taking the digested parts of the feed into the bloodstream DIGESTION - . digestion : the mechanical and chemical processes taking place in the gastrointestinal tract by which food

Digestion - . the tube starts here:. you are a tube inside a tube…. this tube is called the gut . and although there

Digestion - . digestion – the process by which food is broken down into absorbable units. the key organs of the

DIGESTION - . by erin and courtney . evolution. two types of digestion intracellular: break down of macromolecules

DIGESTION - . digestion. how digestion takes place. digestion makes it possible for the body to use food. during

Digestion - . chapter 6.1. the hierarchy of the human body. the body is composed of cells tissues consist of groups of

Digestion - . chapter 19. what is digestion?. process by which the body breaks down food into small nutrient molecules.

Digestion - . objectives: students will be able to describe the 3 main functions of the digestive system. students will

Digestion - . get that out of your mouth; you don’t know where that has been. how this works. what is happening

DIGESTION - . the process of preparing your food for