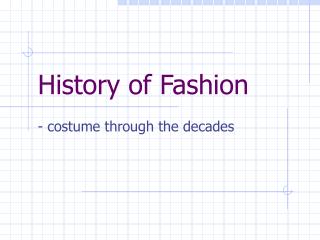 History of Fashion. - costume through the decades. Why Fashion?. Fashions move ever forward at a dramatic pace due to several factors: Change of seasons Planned obsolescence Technological advances Conspicuous consumption … Fashion History - . b.c. to present times. b.c. fashions of this period come from several groups in existence at this

History of Sustainable Fashion - Sustainable fashion is making its way in the industry at its own pace. find out how and

The History of Fashion - . learning targets. describe the evolution of fashions from early civilizations to the

Fashion History - . fashions of the twentieth century open word to write the answers for these questions. gibson girls.