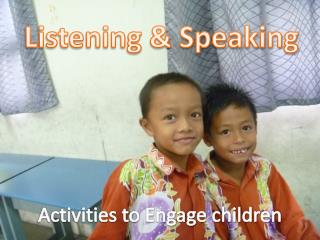 Listening & Speaking. Activities to Engage children. 1. Typhoon!. The Learning Activity that can weather all storms. All the excitement of a Game Show. right here in the classroom!. So -why is it called “Typhoon”?. Think of a very strong wind. that blows everything away.

What is listening? - . “listening involves making sense of spoken language, normally accompanied by other sounds and

Listening - . listen up!!!!. passive listening- a listening role in which the listener does not share in the

Listening - . starter…. a man and his son are in a car accident. they are taken to a hospital where the man is kept in

LISTENING - . oral communications. active vs. passive listening. listening is a skill active: a listener is engaged and

Analytical Listening - . what is effective listening?. ‘speak, lord , for your servant hears .’ (1 sam 3). about

Listening - . we have two ears and one mouth so that we can listen twice as much as we speak. . improving your listening Listening - . we have two ears and one mouth so that we can listen twice as much as we speak. ~ epictetus. of the time

LISTENING - . the too often forgotten part of communication. the listening process. how is listening different from

Listening with Love - . here are two excerpts from my daily reflections during my practicum placements. they exemplify

Difference between Hearing and Listening - . hearing non-selective easy physiological. listening process through which

Listening - . “to listen actively to another human being may the greatest gift you can give a person. the power to