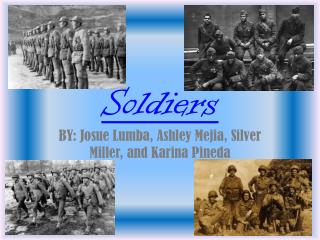 Soldiers. BY: Josue Lumba , Ashley Mejia, Silver Miller, and Karina Pineda. What was the unique contribution that Army Chief of Staff General George Marshall made to the United States war effort during World War ll?. Attended the Atlantic Charter Conference Soldiers - By : juan . soldiers. what do they

Soldiers' Angels - . words from a soldier. it's not the &quot;things&quot; that are sent that matter to us, it's

Child Soldiers - . by: keshia ortega hsp 406-. what is a child soldier . misconception- the term ‘child soldier’ has

Child Soldiers - . child soldiers. will you listen? young voices from conflicts zones: we are displaced children. we are

Buffalo Soldiers - . westward expansion unit. by: jessica morgan, hope marchesseault, and tyler michaud. who are the

Child Soldiers - . “war violates every right of a child – the right to life, the right to be with family and nurtured

Child Soldiers - . dr supriya akerkar. in this lecture. why are child soldiers a development issue? understand the