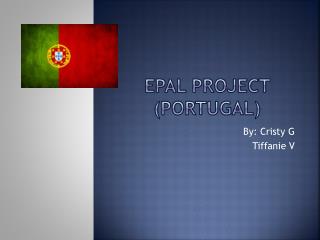 Epal project (Portugal). By: Cristy G Tiffanie V. Geography of Portugal. Portugal is an extension of the mountainous formations of the Iberian peninsula. Portugal borders Spain and includes many islands in the Atlantic ocean. Many of the rivers located here spew out into the Atlantic ocean.

Portugal - By kenyanna easter and kaylah moore. portugal. capital. the capital is lisbon. language. the language is

Epal Project By: Savannah J and Chidima O - . amelie. she is savannah’s epal. she lives in paris with her mom, dad,

E-pal Project: Portugal - Ryan c austin g. e-pal project: portugal. geography. portugal is on the coast of spain and they

ePal connection Project “The Way We Are” - . prepared by:. a’4 class &amp; a’7 class. george vasiliki sotia

Epal Project - . by, patrick c and zach t. during this power point, we will explain our epals country, portugal, and our