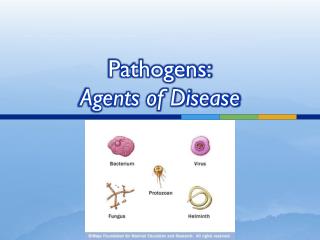 Pathogens: Agents of Disease. Microbiology. Microbiology is the study of microorganisms. Microorganisms are mostly unicellular (single-celled) organisms too small to be seen without a microscope. They include viruses, bacteria, protozoa, and some fungi.

Chapter 22 - . the lymphatic system lecture outline. introduction. the ability to ward off the pathogens that produce

Alzheimer’s Disease - . by sarah chorn. why alzheimer’s? . topics to be covered. history of alzheimer’s

Communicable and Non-Communicable Diseases - . journal #1. what could you do to help prevent the spread of communicable

Facts about Raising Agents - . raising agents work by incorporating a gas into a mixture. when you heat the gas it