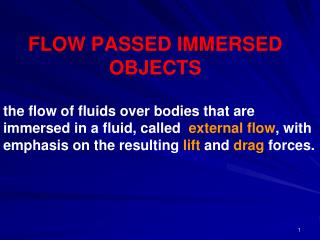 FLOW PASSED IMMERSED OBJECTS. the flow of fluids over bodies that are immersed in a fluid, called external flow , with emphasis on the resulting lift and drag forces. . Many applications in food and chemical engineering -flow passed spheres ( settling )

Heat - . the fire down below. heat. a flow of energy from objects of higher thermal energy to objects of lower thermal

DATA FLOW DIAGRAM ( PART 2 ) - . four basic rules. the dfd must have at least one process, and must not have any

Objects and Classes -- - . now that some low-level programming concepts have been established, we can examine objects in

Creating Objects and Writing Data - . objectives. after completing this lesson, you should be able to: design data store

Culture - . what is culture?. culture: is the language, beliefs, values, norms, behaviors, and material objects that are

A Simple Battery - . a battery uses two different materials (usually metals) for the anode and cathode, immersed in an

Note the different objects in this picture on worksheet 1 - . do you know what these objects are called?. celestial

Immersed Tunnels - . typically, an immersed tunnel is made by sinking precast concrete boxes into a dredged channel and