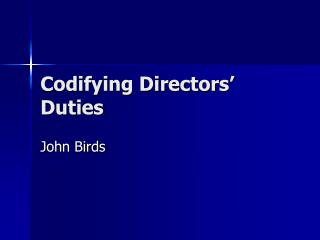 How to Deal with Rejections - . are you having a tough time dealing with rejection? claim rejection, that is? sending

New Companies Act - . salient features of importance to the industry and opportunities / critical risks to the chartered

The Bribery Act 2010 - . an overview of the act with reference to the quick start guide published by the ministry of

CSR in a company law context - . legal duties of directors. some relevant questions. key question: does the pursuit of

Corporate Governance in the UK, USA and Belgium - . andrew bloom. what is corporate governance? the uk government’s

Cataloging at Source: The View from NATO - . overview. the dla/dlis enterprise cataloging at source projects sponsored by