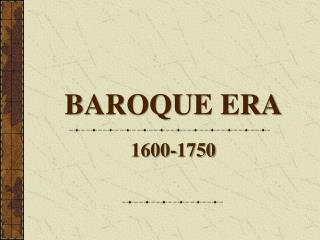 The Baroque Era - . painters. baroque painting and visual arts…. artists in the baroque era had a great desire to

Baroque Era - . 1600-1750. baroque era. baroque is a term generally used by music historians to describe a broad range of

Baroque - . rationality symmetrical; use of pyramid in composition stable some use of contrast. emphasis on emotional