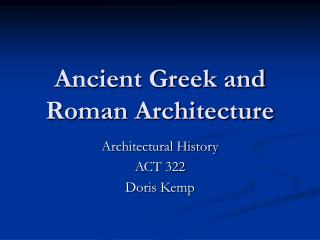 The Legacy of Rome - . the legacy of rome. main idea : rome passed on many achievements in government, law, language and

The Legacy of Rome in the Modern World - . &quot;rome perished, yet it lived on.&quot;. roman architecture.

Classical Europe Ancient Greece and Rome - . how did ancient greece and rome influence our history and culture?. ancient

Welcome to Ancient Rome - . by: abdulla al-badi . roman art. roman art was influenced by many things. they were

Roman Art - . 9.1 the rising power of rome . the roman republic . under etruscan rule rome grew to become the biggest

Roman Art - . roman art. what was roman art like? the romans admired greek art and architecture. they placed greek-style