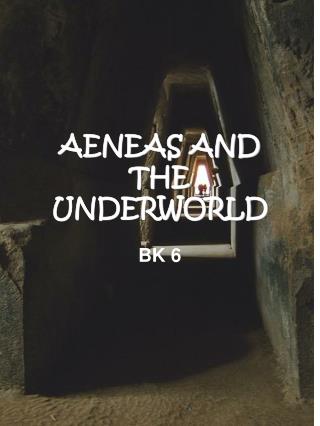 AENEAS AND THE UNDERWORLD

AENEAS AND THE UNDERWORLD. BK 6. ANSWER THESE QUESTIONS AS STATEMENTS. Who built the temple to Apollo and what scenes did he decorate it with? (pg 147) What did the Trojans have to do before consulting the Sibyl? What does the sibyl promise to the Trojans? (one word) (149)

AENEAS AND THE UNDERWORLD

A descent into Hades - . lake avernus, the birdless lake; an entrance to the underworld. a map of hades, erebus or the

Romulus AND Remus - . mythology: the founding of rome. aeneas. as the greeks were destroying troy at the end of the

The Underworld - . by christian

The Egyptian God Anubis Guardian of the Underworld - . by: garrett mcfadden. anubis fast facts. anubis has the head of a

Mythspace - . sign out. a place for friends. persephone. persephone says: does not want to go back to see hades! updated:

The Underworld - . by emerson, jayden, max and jonathon click here.

The lightning thief setting: The underworld - . by: jaron register. the

The Greek Underworld - . by muzamel khan and shabaaz punjani. background of the underworld. w as a place where souls went

The Fall of Troy and The Adventures of Aeneas - . by: jacob roth and eric le. the fall of troy. achilles killed prince

The Descent To The Underworld - . world literature i presentation by: ralph monday. &quot; man is the cruelest