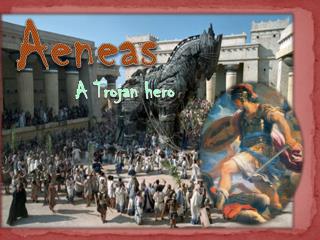 Aeneas. A Trojan hero. Hook . Greek mythology is the body of myths and legends belonging to the ancient Greeks concerning their gods and heroes, the nature of the world, and the origins and significance of their own cult and ritual practices. .

Romulus AND Remus - . mythology: the founding of rome. aeneas. as the greeks were destroying troy at the end of the

Aeneas - After leaving troy, this hero played a role in the founding of rome. he is the ancestor of the prominent roman

The Adventures of Aeneas - . by: reilly hicks, brittany krugh , and a.j. mcdonald. background info of story. from the

Aeneid I.418-440 - . aeneas and achates , rendered invisible by venus, proceed to carthage and admire the rising

Ancient Rome - What contributions has rome made to our society?. ancient rome. when did it all begin?. the myth of