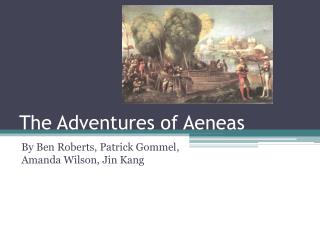 The Adventures of Aeneas The Adventures of Aeneas. By Ben Roberts, Patrick Gommel, Amanda Wilson, Jin Kang. Heroic Qualities and Flaws. The main character of the story is Aeneas and he is an archetypal hero

The Adventures of Aeneas

MY GREEK GOD’S NAME IS AENEAS - . his symbol was, he was always carrying his father on his back. aeneas was strong,

Aeneas - . a trojan hero. hook . greek mythology is the body of myths and legends belonging to the ancient greeks

The Adventures of Huck Finn - . the adventures of huckleberry finn was written by mark twain. it first published in the

Big Question: What adventures do you have through the day? - . author : rick walton genre : animal fantasy. big question:

AENEAS AND THE UNDERWORLD - . bk 6. answer these questions as statements. who built the temple to apollo and what scenes

from the Aeneid from Book II, The Fall of Troy by Virgil - . the mykonos vase, with one of the earliest known renditions